Riviera Maya Film festival take place in April in Mexico. The film festivals includs an awards ceremony, previews of the latest films as well as exhibitions and of course, an open-air cinema. In many Mexican cities such as Tulum, Cancun and Playa del Carmen, spectators are able to enjoy the most beautiful locations on the beach with an evening of open-air cinema showing an abundance of great films.

As in the previous year where such Hollywood stars as Clive Owen and Susan Sarandon were in attendance, this year didn’t disappoint with a plethora of Hollywood actors also present. This years most noticeable attendees were Christian Slater, Stephen Dorff and amongst others Ashley Benson, who was presenting her new film ‘Spring Breakers’ on an inflatable movie screen at the beach of the Hotel ‘Papaya Playa Project”.

The Botswana Independence Film Festival (BIFF) is an event aimed at recognizing, showcasing and appreciating film productions made by the local film industry; directors, producers, actors, multimedia students, film goers and its industry stakeholders. This will be an annual event planned as part of the celebrations that commemorate Botswana’s independence.

Outdoor movies were also a big part of the Festival. The screenings took place at the Grand Palm Hotel. Visitors had the chance to watch movies by the pool in the extensive gardens of the hotel. Documentaries, a feature film and several music videos made in Botswana were shown on the inflatable movie screen. Public workshops and discussions were also held and the enthusiasm of the people was quite overwhelming. 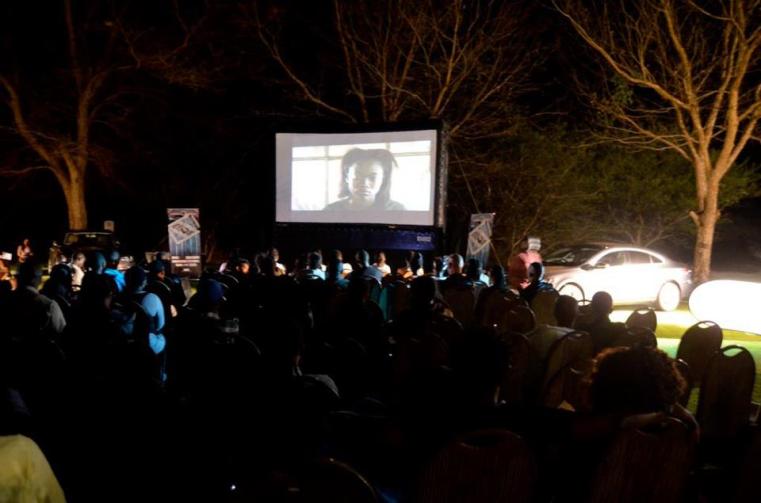 The organisers look forward to an even bigger and better programme in 2013 to awaken the Botswana film industry.

Since 2004 the Dubai International Film Festival (DIFF) is the leading film festival in the Middle East, Asia and Africa. Many well-known filmmakers as well as independent directors from Asia and Africa were participating in the competition.

The DIFF presents outdoor movies every year. The movies are shown on “the Walk”, the famous boardwalk in front of the Jumeirah Beach Residence. Various movie highlights are projected on a giant inflatable screen (AIRSCREEN) at night. People can also enjoy live music and dancing performances in front of the 66ft. by 33 ft. mobile screen.

Apart from that the DIFF  honoured the famous American actor Sean Penn with a Lifetime Achievement Award. Festival’s chairman Adulhamid Juma said that Penn is a role model for the whole youth of Dubai due to his humanitarian work.

Open-air cinema under the stars at Guadalajara International Film Festival

Very popular were the outdoor movie screenings. Two inflatable screens were used showing movie classics at several locations in and around Guadalajara. Amazing backgrounds with cathedrals and historical buildings made every screening a great event for the spectators. 30ft (9m) wide AIRSCREENS with a crisp digital projection guaranteed a perfect viewing experience.

More photos and videos of AIRSCREENs around the world: www.airscreen.com