One may be inclined to think that open-air cinemas are a relatively new invention; this couldn’t be further from the truth! So let’s take a look at the history of open-air cinema. In 1895 the Lumière Brothers became the first people to step into this world with the invention of cinematography.  From this invention came the name ‘Cinema’ which is the word still used today. At the time this device was being used, it was only possible to show films of up to one minute in length. At the start of the 20th century these ‘living photographs’ as they were known, were to be seen in variety halls and theatres, it wasn’t until 1907 that the first moving cinema was created.

In 1933 the world’s first ever drive-in cinema was established in the USA. The ‘Camden Drive-in’ in New Jersey opened its doors to the muscles cars and the classic American old timers. However the 1950’s were the absolute boom period for the drive-in, in the USA. The 50’s brought a wave of cinema closures and bust cinema chains, however the drive-in became stronger and larger and became the hottest ticket in town. The James Dean Films, cheaper tickets and the private atmosphere of sitting in your own car all added to the magic of the drive-in. It wasn’t only the Americans enjoying the drive-in cinema, but also the Europeans wanted a slice of the action. The first drive-in in Europe is to be found in Frankfurt and this is still used today. The following decades saw a decline in the drive-in and a rise in the more commonly found today, Multiplexes. These had smaller screens but much more choice for the modern film lover. 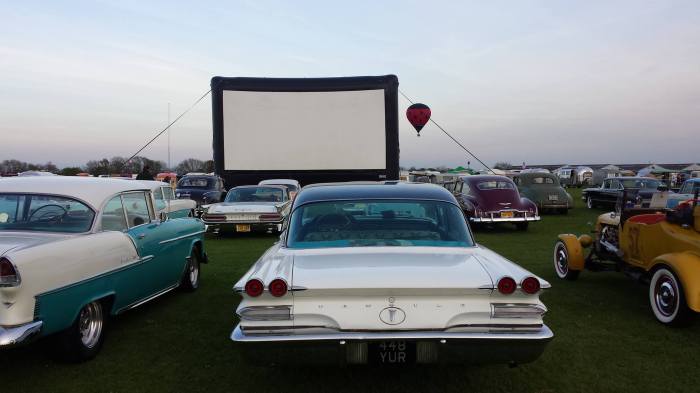 The fascination of watching films outdoors never really died out however and at the end of the 1980’s the new wave of open-air cinemas which are still to be found today in fact, opened their doors to the public. Next to the traditional Greek open-air cinemas of Athens or the Island of Santorini, newer open-air cinemas were springing up in cities such as Berlin, Nuremberg and Zurich. It was at this point where the inflatable screen, the AIRSCREEN came in to action. With the assistance of the inflatable frame the need for scaffold constructions diminished and thus the ease of open-air cinema rose. This meant that practically everywhere could be turned into an open-air cinema in the matter of a moment. The first prototype AIRSCREEN was used at an open-air festival in 1994. Inflatable screens has been used since then at thousands of events all over the world. Mobile cinema is however not only made possible due to the revolutionary inflatable screen, but also the wonderful locations it can take place in.

Of course the great advantage of mobile cinema is that it can go practically anywhere. The world can provide the perfect backdrop to your film whether it is a big landmark like Trafalgar Square in the United Kingdom, a wonderful park or lake such as Lake Michigan, USA or a huge stadium such as the Nou Camp in Barcelona, there are no limits to the backdrops to an open-air cinema. However there’s one thing you can be sure of, wherever the backdrop, the AIRSCREEN provides fantastic screen technology for the world of outdoor cinema.

The AIRSCREEN Company is centrally located in Münster/Germany. Through our distribution partner network we are present in the important markets worldwide. AIRSCREEN Company CEOs and owners have more than 20 years of experience in the world of inflatable movie screens and in events organizing. Don't trust others who just claim to have what we offer you: The security of the original AIRSCREEN® brand inflatable movie screen. View all posts by openaircinemas

One thought on “The History of Open-Air Cinema”